Today’s post comes from a new blog started by Andrea Bozman from the University of Nordland, Bodø, Norway. She is a Ph.D student studying the Helmet Jellyfish, Periphylla periphylla. From Andrea’s blog, www.smackofscience.com, she weighs in on the question of whether jellyfish blooms are increasing. In Norway and in many other areas of the world, people are worried that menace jellyfish might be eating all the young fish, devastating vital fisheries. And increasing jellyfish blooms only make matters worse. Is this the case? Actually, the jury is still out — some scientists are saying that jellyfish blooms are natural and just a part of a global cycle, while others say that jellyfish are increasing due to human-caused degradation of the marine environment. This kind of debate is healthy in science, and the conversation worth following. 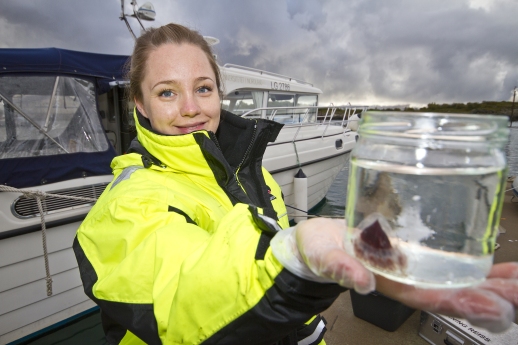 Andrea Bozman from The University of Nordland, Bodø, Norway

Revenge of the blobs

Jellies have made a name for themselves in the news, without much effort on their part. Numerous stories linking jellies with negative events are reported world over. In tropical locations this is normally associated with stingers, those jellies that can prove fatal upon contact. Here in Norway, we are not exposed to such angry jellies, but their less hurtful relatives can have economic consequences for industries such as aquaculture and fisheries. In 2011 an influx of jellies in Kaldfjorden sunk a salmon net cage, resulting in an approximate 30 tonne loss of fish. However, the presence of jellies is not a new problem for Norwegian waters. We have our own contender that is rather happy up here – Periphylla periphylla.

Interactions between fish and jellyfish are not always a bad thing. Some jellies are known to eat fish, others are eaten by fish, and still others provide protection for young fish. Instead of assuming negative connotations on the easiest target – the soft-bodied blobs floating around in our seas – we need to conduct thorough studies on the systems. The increase in reports of jellies may be a compounded effect of media interest rather than an increase in actual jelly numbers. Jelly blooms are nothing new. Well preserved blooms have been found in the fossil record. That said, a change in the location and numbers of some jellies is a fact. And Periphylla in Norway is a prime example.

Yet like jelly blooms, the Periphylla story is also complex. Periphylla is one of the most globally distributed jellies and has always been in Norway. Why numbers are increasing in some areas is unclear. The occurrences may be new or may be part of a cycle. Periphylla is long lived and it may take years for an individual to reach the adult stage. The recent increased numbers in some fjords may have been years in the making. Our knowledge of jellies needs to grow as jellies are likely both misunderstood and underestimated players in the fjords.

Check out the whole blogpost at: http://smackofscience.com/2013/11/15/the-good-the-bad-and-the-jelly/

Thanks for continuing to help out with Plankton Portal! Help from volunteers like you contribute to our understanding of the life histories, distributions and behavior of jellyfish. This information is crucial to have to better understand how jellyfish blooms happen and whether they are increasing globally.